Now that I was beginning to create various pieces of work for student council, I suddenly found myself with an actual audience and purpose for my graphic designs. In addition to the constant flow of designs needed for student council, these factors pushed me to create and solidify an artistic identity for myself. Meanwhile, being in student council meant that I was surrounded by role models and leaders amongst my peers, pushing me out of my comfort zone as I became heavily influenced, eventually evolving from a timid introvert to a leader of my own, while discovering who I was as a graphic designer as I learned numerous lessons and grew through the work I did for them.

With Halloween rolling around the corner, the first set of posters I did for student council was for a Halloween spirit week event, thus numerous posters would be required. Due to the workload, the design committee exec decided to split the work between me and another student council member, making this the first graphic design project that I've done with somebody else. Inspired by the teaser poster for The Dark Knight, as seen below, I decided on a theme of using horror movie figures placed behind foggy glass, on which blood and text would be featured on top of. 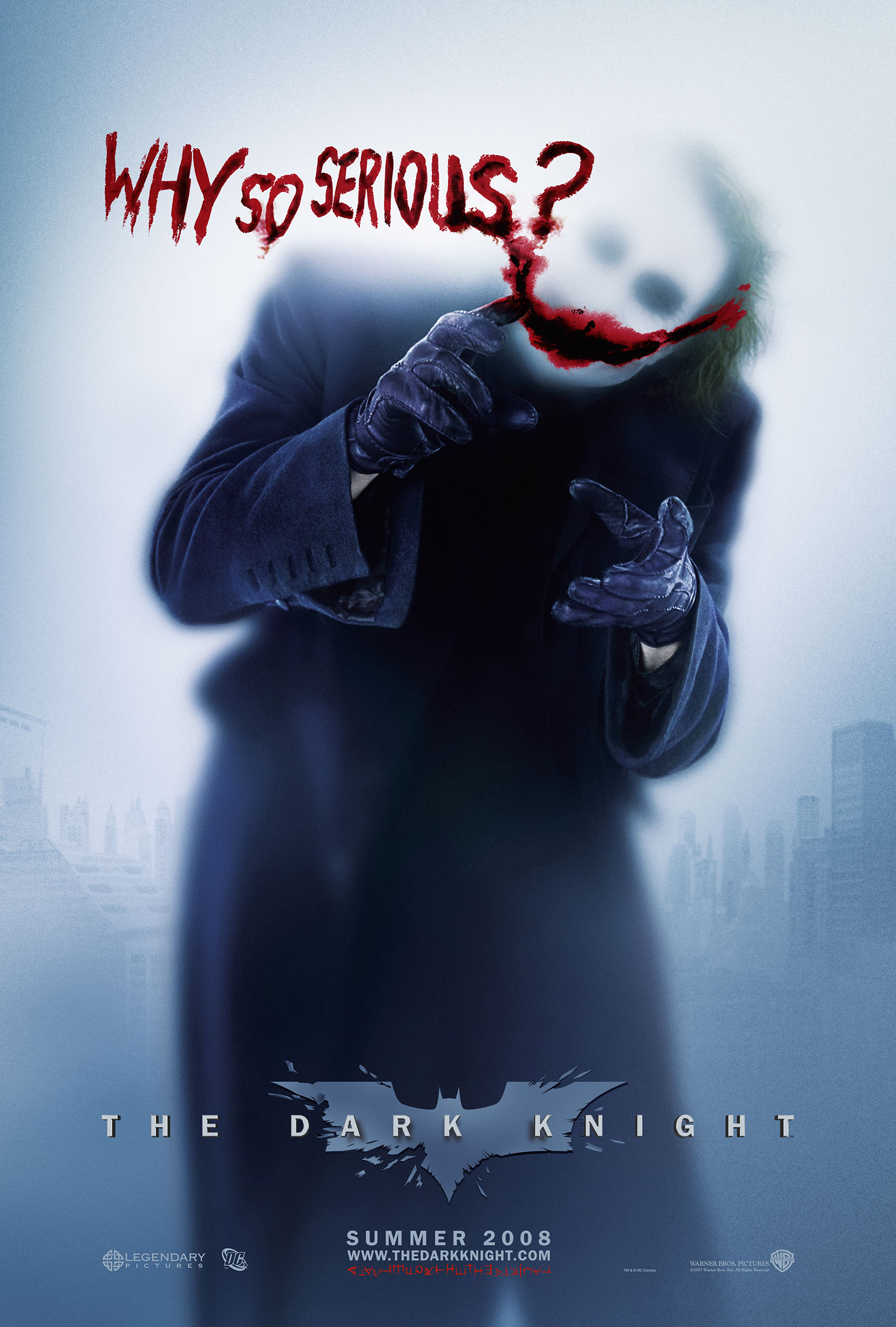 However, it quickly became apparent to me that in the world of graphic design, when working on a group project, everybody in the group has different strengths, weakness, and skill sets when it comes to this medium. Thus, nothing is more important than strong communication between group members in order for a project to become successful. In order to retain a common visual look and theme, and to assist my partner, I wrote up a tutorial on how to get the foggy glass and blood effects just right, and making slight adjustments to polish up her work, with my partner additionally doing the same for me. So technically, the four featured works above are not of my own creation alone, but rather a culmination of skill sets from two artists combined into a series of works.

My next work would be a poster advertising the school's New York themed winter formal. This marked the first graphic design I would create that doesn't feature photoshopping of preexisting images, thus in order to create this poster, I had to discover a digital artstyle of my own. I would come up of idea after idea, thinking of what types of elements I should include in this poster and how I would feasibly represent it in a visual manner. I eventually settled on a minimalist art style, a style which I would go on to use in many of my future works as I evolved it over time. However, now with so many ideas in my head, I ended up making a poster with a little less than a dozen visual elements that I was satisfied with. However, while she was pleased with the poster, the design committee exec reasonably thought that the poster was too visually cluttered, with some elements straying away from the theme. After some discussion with her, we came to an agreement on how to make the best version of this poster, and thus the work showcased above was made. Again, communication was key in making this project successful. Thus, one of my biggest takeaways from my time as a student council member is that as a graphic designer, strong communication leads to successful work. As my work began reaching larger audience, I made sure to communicate with my commissioner to figure out what image they had in mind, express the image I had in mind, and then find common ground, and communicating as you progress in your project so that you can quickly adapt and return to the right path.

A particular instance when communication between parties was successful was during our school carnival, where I worked with several different clubs to produce advertising for their booths.

However, there's always a case where either the commissioner is not as willing to talk, or I haven't opened up enough to them to communicate well, in which the final product becomes riddled with problems. While there were numerous examples of this within the graphic design works that I've done, one particular example is when I was commissioned to come up with clothing designs for a student organized clothing. I was given free reign on whatever designs I wanted to create, and used this opportunity to practice and experiment with different artistic styles. But due to an extreme lack of communication and misinformation, my designs became null as they never became featured, and my hours of hardwork basically became an unnecessary sacrifice. Lesson well learned.